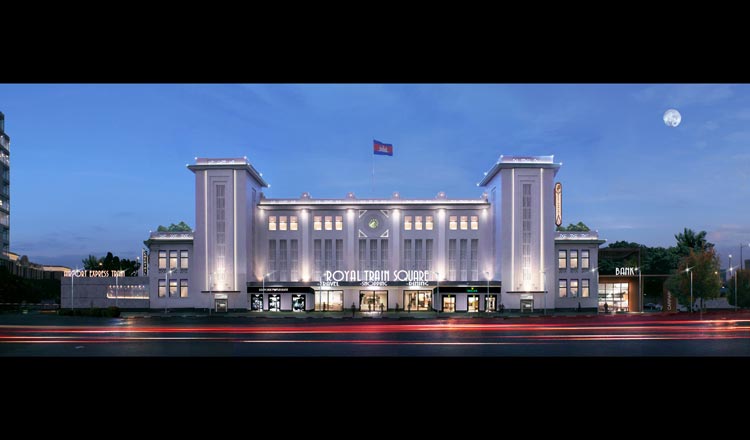 A group of European and US investors will spend $5 million to renovate Phnom Penh’s Royal Railway Station and turn it into a modern entertainment centre and hangout spot.

According to a press release issued yesterday, the Mall Group seeks to turn the railway into ‘Royal Train Square’, a 3,000 square metre retail and commercial space.

The centre will include shops, cafes, restaurants, and banks as well as office and exhibition space.

Scott Bolls, the principle lead on the project, said the railway station is a colonial building of great cultural significance that is rarely visited by locals or foreigners.

He said Royal Train Square will give these people a “new place to meet, dine and relax in beautiful surroundings”, adding that it will feature high-end cafes, restaurants, and shops.

“With the emergence of Phnom Penh’s central business district it is the right time to bring the railway station into the 21st century as a destination for all residents of the capital and visitors to come and unwind in a breathtaking location,” said Mr Bolls.

“It will blend seamlessly with its surroundings, especially the beautiful square in front of the station, and we are confident it will become one of the city’s favorite places to meet and enjoy fine dining, shopping, and unique events and exhibition space unlike anything the city has seen before.”

The renovation project will start in upcoming months, he added.

“We anticipate significant interest from international and local brands, and are keen to lock in a major main tenant soon who can work with us to help shape the ongoing project,” said Mr Bolls.

The project aligns with the Ministry of Public Works and Transportation’s long-term plan to fully rehabilitate Cambodia’s railways and related services to make rail travel a viable option for passengers.

Phnom Penh’s railway station was built by French colonial authorities in 1932 as the terminus for the railway line to Battambang.

It was refurbished in 2012 and in the last five years has seen the resumption of regular train services run by Royal Railways to Kampot, Sihanoukville, Pursat, and Poipet with a regular shuttle service to Phnom Penh International Airport.