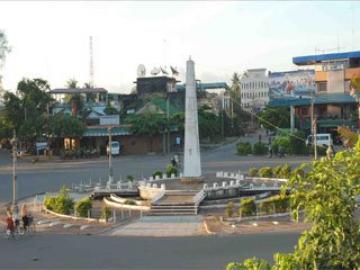 This province is located in the Southwest of the country, having an eighty kilometres coastal strip with the Gulf of Thailand. The provincial capital is named Kampot and sits near the base of the abundant green Elephant Mountains and the famous Bokor Hill Station. Compete to crowded Sihanoukville in the North of the province you may find quietness.

Most visitors come here to have a look at the old French colonial architecture, which is one still in charming condition, to have a vantage point for visiting the near beaches or the small islands of Kep. Kampot province is also renowned for the quality of its fruits (durian, coconut, mango, etc.), its sea salt and of course the famous Kampot Pepper. The special fresh climate and soil type of Kampot as well as the experience from several generations of pepper farmers make this pepper unique and much sought-after by gourmets worlwide.

The small town of Kampot on the Tuk Chhou River is 5km inland from the sea. Fishing and farming are the main activities; durians and melons grow in abundance.

On the circle is the Prachummith Restaurant, which is close by is the Amar Restaurant. To the south near the river is the GPO and telecommunications building. At the north end of town, about 1.5 km away, lays the Central Market, with quite a lot of food stalls. All Kampot transportation is concentrated within the range of the market cycle, motors, taxis, trucks, and buses. The railway station lies further north, but isn't used anymore.

Find hotels in Kampot on Agoda.com. Free Cancellation and Pay when check out.

Kampot province is 4.873 square kilometres big. It's located in the Southwest of the country and is bordering to the North with Kampong Speu, in the East with Takeo, in the West with Sihanoukville and Koh Kong and to the South with the Gulf of Thailand. The East of the province consists of the typical plain area for Cambodia, covering rice fields and other agricultural plantations.

The Western part of the province shows up with the well known Bokor National Park, being a part of the grant Elephant Mountains, which is rich in lush forests and a huge range of wildlife. The two highest points in the province are the Bokor Hill Station with 1,027m altitude and further north another hilltop with 1,050m altitude. Some people consider the countryside similar to the sharp Vietnamese limestone rocks shooting up of flat plainsandnbsp; an impressive aspect.

The country has a tropical climate - warm and humid. In the monsoon season, abundant rain allows for the cultivation of a wide variety of crops. This year round tropical climate makes Cambodia ideal for developing tourism. Travellers need not to fear natural disasters such as erupting volcanoes or earthquakes, and the country is not directly affected by tropical storms.

Climate: Cambodia can be visited throughout the year. However, those plans to travel extensively by road should be avoided the last two months of the rainy season when some countryside roads may be impassable. The average temperature is about 27 degrees Celsius; the minimum temperature is about 16 degrees. December and January are the coolest months, whereas the hottest is April. Kampot itself is one of the cooler regions of the country, due to its situation next to the sea and high rainy mountains its cooler and fresher.

Various actors, according to the needs of the most important target groups, implement rural development measures effectively and efficiently. Above all, the rural population should be able to sustainably better satisfy their basic needs. Beside the profitable fruit cropping such as durian, mango or coconut Kampot Pepper has been renowned for decades as one of the best peppers in the world. This pepper has a very distinct flavour and smell, especially when its fresh harvested. It develops an enthralling aroma, strong, delicate and aromatic. Therefore it is famous in the world and exported to many countries.