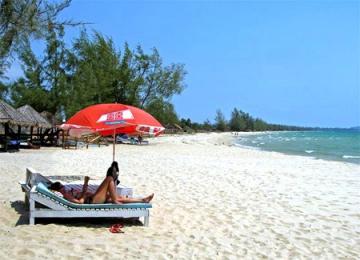 Sihanoukville province is a small southern province of Cambodia. The capital sits on a peninsula with beaches and tropical islands around. Sihanoukville (also known as Kampong Som or Kampong Saom) was founded in 1964 to be the only deep-water port in whole Cambodia. It is gradually being redeveloped as a tourist attraction, but despite the promise of massive Malaysian investment - a casino is planned for Naga Island - tourist numbers are still fairly low. Also its nice with sand beaches and several paradise islands have made it popular as a tourist destination.

In honour to the king, who fought for the independency of Cambodia the provincial capital was called Sihanoukville. Located in the southwest corner of Cambodia, 232km from Phnom Penh, Sihanoukville can be reached via National Highway No 4. White-sand beaches that include Ohchheuteal, Sokha, Pram Pi Chan, and Deum Chrey beautify this coastal city. These beaches are known for their quiet, cosy atmosphere and the large stretches of white sand and clear waters and these make them popular spots for families on vacation. These seaside paradises with the refreshing coolness of the fresh water streams can be enjoyed all year round.

Business opportunities in Sihanoukville are varied from financial activities to tourist and travel-related industries in conjunction with the government's objective of making Sihanoukville a major tourist destination besides its status as an International Offshore Financial Centre. The government welcomes both foreign as well as local investors to participate on a joint-venture basis.

This famous see side resort is formed by wide and huge streets and quite new big concrete buildings, which lost any impression of the former architectonical colonial style. As the town is not a small place due to it's wide spread urban areas, the best way to get around is to hire a motorbike. Beside the nice beaches and some very nice vantage points there isn't that much to see in the town itself.

To catch a nice view on the city you best climb the small hill to Wat Leu. Wat Krom is another place of interest as this is a recently build pagoda, because the older one was destroyed by the Khmer Rouge and it houses a sanctuary called Yeah Mao, the guardian of the cost. Nearby to the town there are nice places for a detour such as the Ream National Park and the beautiful Kbal Chhay Waterfall.

Sihanoukville to islands, ochheuteal beach, dinner in the city

Find hotels in Sihanouk ville on Agoda.com. Free Cancellation and Pay when check out.

Sihanoukville province is a very small province with 868 square kilometres surface. It's located in the very South of the country and is bordering to the North with Koh Kong, to the East with Kampot and to the West and South with the beautiful Gulf of Thailand.

General information about the provincial climate:- Cool season: November- March (20-28c)
- Hot season: March- May (26c -35c)
- Rainy season: May - October (24-34c, with humidity up to 90%.) The best beach weather begins with the end of the rains in November. The dry, warm, breezy weather that follows lasts through January. Night temperatures can get down to a chilly 20? but the days hover around 28?-30?. Many think December and January are best with their balmy temperatures and blue skies.

At the end of January, Sihanoukville begins to warm and continues to get hotter through July (maximum 35?). After February, cool 'mango showers' occasionally blow in from the north. December through June is said by some local outfitters to be the best scuba weather with clearer (though cooler) waters than the rest of the year.

Because of the importance of exports to Cambodia's economy, Sihanoukville and its port are earmarked for further significant development by the local government and through international monetary support.

Sihanoukille is for sure largely tourism-based but additional financial and industrial initiatives are also underway. One major government objective is to make Sihanoukville a premier tourist destination as well as an International Offshore Financial Centre. Foreign and local investors are invited to participate in a range of joint business and financial ventures. The agricultural sector of Sihanoukville plays definitely not a big role in the provincial economy, as the rocky peninsula isn?t the place for cropping and such things.