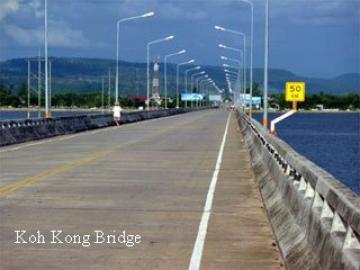 Koh Kong is the most southwestern province of Cambodia. It is one of the biggest provinces in the whole country with a long undeveloped coastline and a mountainous, forested and largely inaccessible interior, which embraces part of the Cardamom Mountains, the biggest coherent rainforest of Southeast Asia. Its tourist attractions include abundant wildlife; big waterfalls and casinos on the border to Thailand, while an Export Processing Zone and new port facilities are being developed for international trade.

The province is an increasingly popular gateway to Cambodia from Hat Lek in southern Thailand, in part of the reasonably direct access to the port and beach resort town of Sihanoukville. While this was previously a gruelling journey by boat and pickup on rough bumpy roads using small ferries at river crossings, the donation by the Thai government of new road infrastructure is improving access greatly.

The name means " Krong Island Province". Its capital is Krong Koh Kong, which is located in the West of the province right next to the Thai border. The city is surrounded with a large forested area connected to the mainland by bridges and ferries. It's generally a quiet town, but there are many reasons to stay in Koh Kong for more than one night such as the nearby islands, rivers, tours into the nature and the buzzing nightlife.

The people of Koh Kong speak mainly Khmer, and most speak some Thai as well. You can also find many Chinese and Vietnamese speakers as well as a lot of broken English. Your stay here will be economical as lodging, food and transportation is relatively cheap here. Please make this place a stop on your travels through S.E. Asia and you won't be disappointed.

Find hotels in Koh Kong on Agoda.com. Free Cancellation and Pay when check out.

Koh Kong province is 11,160 square kilometres big. It's located in the West of the country and is bordering to the North with Pursat, to the East and South with the Gulf of Thailand and to the West with Kampot and Sihanoukville. The province consists mainly of a huge coherent mountain range, the Cardamom Mountains. Covered with lush deep rainforest it?s the biggest successional forested region in whole Southeast Asia, which is almost not populated but by some small tribes.

There are quite a lot of creeks and rivers running to the see, Stoeng Kaoh Pa and Stoeng Me Toek are the biggest ones. You won't find the typical Cambodian plain wet areas, covering rice fields and other agricultural plantations, except from some river benches near the see. The highest point in the province is 1210m.

The economy of Koh Kong, in spite of recent progress of border development, although rapidly increasing, is low compared with most neighbouring countries. The main domestic activity on which most rural households depend is agriculture and its related sub-sectors. Manufacturing output is varied but is not very extensive and is mostly conducted on a small-scale and informal basis. The service sector is heavily concentrated in trading activities and catering-related services.