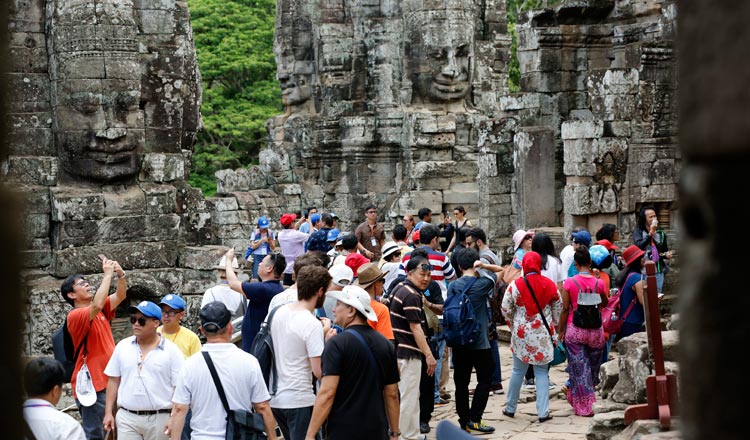 Cambodia welcomed 3.3 million holidaymakers during the first half of the year, an 11.2 percent hike, according to the latest data from the Ministry of Tourism.

The number of Chinese tourists, in particular, experienced strong growth from January to June. 1.2 million Chinese nationals visited the country during H1, a 38 percent increase.

It is followed by Vietnam, Laos, and Thailand, ranking second, third and fourth, respectively.

Tourists from South Korea, on the other hand, declined by 20.2 percent, while those from the United States decreased by 1.1 percent, the Ministry said.

“In our view, the tourism sector is developing positively. The number of foreign tourists visiting the country continues to grow.

“Tourists from certain countries have indeed decreased but this is a normal market trend that should not worry us because, overall, the number of tourists has increased,” Mr Sopheak said.

According to the Ministry, Siem Reap province, home of the famed Angkor Archaeological Park, the country’s top tourist sight, saw a declined in visitors from January to June. Just 1.2 million foreign tourists visited the site, an 8 percent decrease.

By contrast, Phnom Penh and coastal areas saw strong growth in tourist arrivals, with the capital welcoming more than 2 million people and the coast nearly 600,000, a 27 percent hike in both cases.

Mr Sopheak noted that the rising number of Chinese visitors to the Kingdom is part of a wider trend, with more and more Chinese nationals travelling for leisure outside their country.

“The number of Chinese tourists is rising everywhere, not just Cambodia. But in the case of Cambodia, the close diplomatic ties with the Chinese government and the increase in investment coming from that country is certainly helping attract more tourists,” Mr Sopheak said.

He said the decline in the number of tourists in Siem Reap province is the result of tourists choosing to visit alternative destinations within the Kingdom.