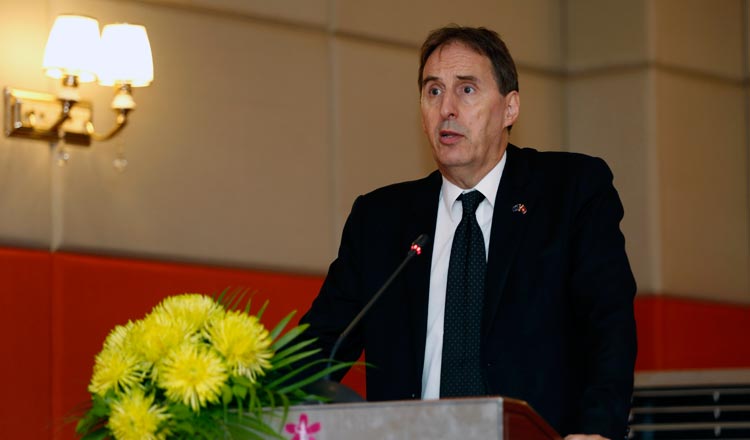 Outgoing European Union Ambassador to Cambodia George Edgar on Friday said he hopes the Cambodian government will address the concerns raised by the EU regarding compliance with conventions of the International Labour Organisation (ILO) and the United Nations.

Speaking to reporters in Phnom Penh on Friday, Mr Edgar said he expects positive results for Cambodia if the EU’s concerns are taken seriously, adding that he doesn’t want to see Cambodia lose the trade preferences it enjoys under the Everything-but-arms (EBA) scheme.

“The EU takes about 50 percent of all Cambodian exports, so the EU is the biggest export market for Cambodia,” the ambassador said. “We hope that something will continue to develop.

“Everybody knows that a procedure has been launched that could potentially lead to the suspension of Cambodia’s trade preferences. We have underlined repeatedly that [the suspension of the EBA] is not the necessary outcome of the procedure and it is not the outcome the European Union wants to see.
“The procedure has been launched because of concerns about a number of developments in Cambodia that have raised questions regarding Cambodia’s compliance with international conventions, particularly the ILO and the UN conventions which are required to access EBA preferences,” Mr Edgar said.

“Our sincere hope is that the Cambodian authorities will address the issue in an effective way and that there is no need for Cambodia’s access to EBA to be called into question,” the outgoing ambassador said, adding that he hopes the relation between Cambodia and the EU will be “very good” and that it will benefit the people.

In February, the European Union started a six-month process of intense monitoring and engagement that could lead to the temporary suspension of Cambodia’s preferential access to the bloc’s market under the EBA trade scheme.

With duty-free access under the EBA, EU is Cambodia’s biggest market for textile and garment products, bicycles and agricultural products.

The Cambodian Rice Federation (CRF) on Thursday asked the European Union to save the livelihoods of half a million families by halting the process to withdraw the Everything-but-arms scheme.

In a statement issued yesterday, CRF said cancelling the trade scheme would be a “painful” addition to the duties that the bloc imposed on Cambodia rice earlier this year to protect European producers. As a result of the new levies, during the first half of 2019, Cambodia’s milled rice exports to the EU fell by almost 50 percent compared to the first half of 2018, CRF pointed out.

“This year the EU imposed duties on Cambodian rice in order to protect domestic producers. This has been acutely felt by most of the 500,000 families in Cambodia who eke out a living farming jasmine and fragrant long-grain rice, even though these varieties are geographically specific and do not compete directly with products grown in the EU,” CRF said in the statement.

“Without the EBA, these efforts will come to naught. The CRF appeals to the EU to save the livelihoods of half a million families and to save the work that we have done to earn your respect, that of consumers and that of those we serve.”

The Garment Manufacturers Association in Cambodia (GMAC) has also joined calls to halt the EBA removal process. In a recent statement, it said the livelihood of 750,000 workers and the welfare of some 3 million Cambodians are at stake.