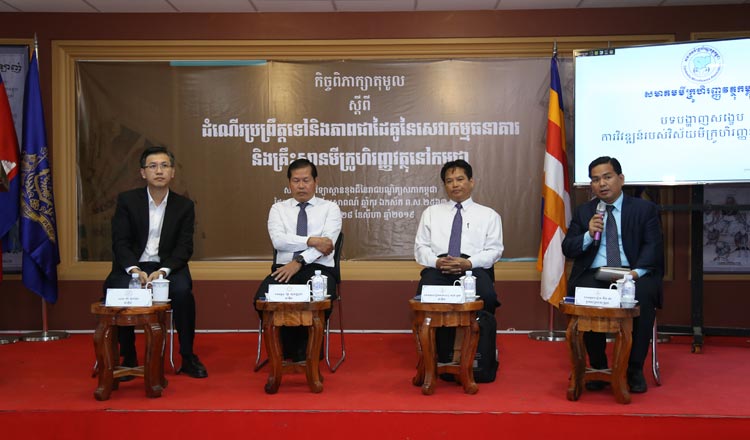 The event was used to present a study by the Royal Academy of Cambodia carried out in response to an earlier study that suggested that loans, particularly microloans, may be harming borrowers in the Kingdom.

According to Royal Academy of Cambodia’s study, only one percent of all borrowers in Cambodia encounter problems repaying their loans.

That finding is in stark contrast with the previous study, conducted by Licadho and Sahmakum Teang Tnaut, which concluded that the industry poses significant risks to millions of local debtors, including land loss and systematic human rights abuses.

At yesterday’s roundtable discussion, organised in partnership with several microfinance institutions and banks, Sok Touch, Royal Academy of Cambodia president, said their study is more scientifically valid because it has a much larger sample.

Mr Touch said they surveyed 3,000 borrowers chosen at random, whereas Licadho and Sahmakum Teang Tnaut’s study looked only at 28 households.

“You cannot look at just 28 people and assume that it applies to all borrowers in the country,” Mr Touch said.

“The important figure to look at is our finding that just 1 percent of borrowers in Cambodia are facing difficulty repaying their loans,” he said.

“Twenty-eight people are not representative of the 2.1 million borrowers in Cambodia. For an accurate scientific study, you have to survey at least 3,000 people chosen randomly,” Mr Touch said, arguing that microfinance institutions have improved people’s living standards in the Kingdom by enabling them to open new businesses and expand existing ones.

According to the National Bank of Cambodia, as of June, 2.1 million people had at least one loan in Cambodia, with the country’s outstanding loan portfolio worth $5 billion.

Mr Touch said neither MFIs, banks nor the current legal framework is to blame for the small percentage of people facing difficulty in the repayment process. Rather, he said, either one of three factors is at play when things go awry – borrowers do not use the loan for the intended purpose; borrowers lack financial literacy; or there has been a natural disaster.

Speaking at the same event, Kea Borann, president of the Cambodia Microfinance Association and CEO of AMK Microfinance Institution, said Licadho and Sahmakum Teang Tnaut’s study focuses only on the negatives and does not seek to convey a complete picture of the situation.

“We established CMA because we want to see the sector grow sustainably. We want people to enjoy access to financial services from registered MFIs,” Mr Borann said. “But the association always requires members to adhere to our strict guidelines when disbursing loans.

“We also educate clients on financial matters so that they use their loans effectively,” Mr Borann said.