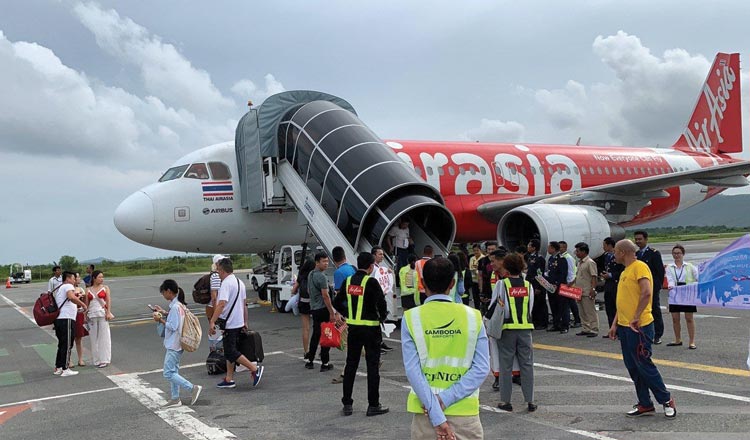 Thai AirAsia uses a 180-seater Airbus A320 aircraft for the regular, weekly route, flying on Mondays, Wednesdays, Fridays, and Sundays.

“It strengthens Sihanoukville and the Cambodian coast as tourism destinations,” she added.

Taing Sochet Krisna, director of the tourism department in Preah Sihanouk province, expected to see an increase in international travellers to the province in upcoming months.

“Being directly connected to Thailand, a very popular tourist destination, means we will get some of the travellers that visit that country. We are also likely to see an increase in investors,” Mr Krisna said.

During the first half of the year, Preah Sihanouk province received 1.3 million tourists, including both local and foreign visitors, according to Mr Krisna.

The government is planning to transform Sihanouk International Airport into the main airfield in the country. Cambodia Airports, the company that manages all international airports in the country, is now working to expand the runway and build a new terminal building in the airport.

The runway will be expanded from 2,500 to 3,300 metres, allowing the airport to handle long-haul aircraft, said Sin Chanserey Vutha, spokesman at the State Secretariat of Civil Aviation.

Mr Vutha said renovation work aims to prepare the airport for the Asean Summit, which the city will host in 2022.

Ms Hammou said the runway expansion will be completed by mid-2020.