Cambodia is celebrating the Independence Day on 9 November every year following the water festival.

Cambodia was under French colonial rule for nearly a century. During 19th century, the kingdom of Cambodia had been reduced to a vassal state of the kingdom of Siam which had annexed its western provinces, including Siem Reap Angkor while growing influence from the Vietnamese Nguyen Dynasty threatened the eastern portion of the country. On 11 August 1863, King Norodom signed a treaty acknowledging a French protectorate over his kingdom. The state gradually came under French colonial rule. Under the treaty, the Cambodian monarchy was allowed to remain, but power was largely vested in a resident general to be housed in Phnom Penh. France was also to be in charge of Cambodia’s foreign and trade relations as well as provide military protection. Siam later recognized the protectorate after France ceded the Cambodian province of Battambang and recognized Thai control of Siem Reap Angkor.

The French Protectorate of Cambodia formed part of the French Colonial Empire in Southeast Asia. After the French establishment of a colony in Cochinchina (present-day southern Vietnam) in 1867, Pierre-Paul de La Grandière, colonial governor of Cochinchina, was carrying out plans to expand French rule over the whole of Vietnam and viewed Cambodia as a buffer between French possessions in Vietnam and Siam. In 1896, France and the British Empire signed an accord recognizing each other’s sphere of influence over Indochina, especially over Siam. Under this accord, Siam had to cede the province of Angkor back to the French-controlled Cambodia. The accord acknowledged French control over Vietnam (including the colony of Cochinchina and the protectorates of Annam and Tonkin), Cambodia, as well as Laos, which was added in 1893. 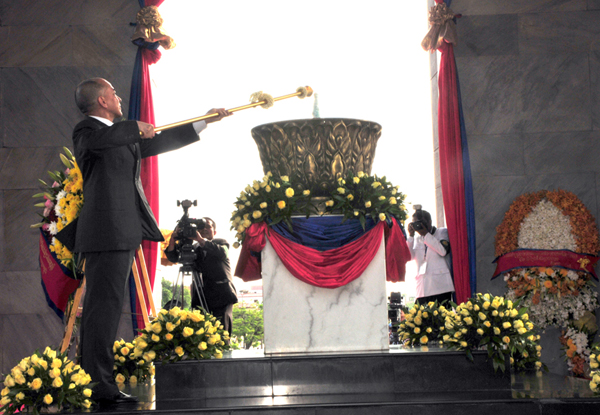 France tightened its control over Cambodia while expanding the protectorate’s territory in 1902 and 1904 through treaties with Siam, which added Preah Vihear Province to Cambodia and gave France full control over the Bassac River respectively. Later territorial disputes between France and Siam over Battambang and Siem Reap Provinces led to France’s occupation of Trat Province until Siam gave in to French pressure and ceded the provinces, originally Cambodian territory till the latter part of the 18th century, in 1907 along with Banteay Meanchey Province. The acquirement of these provinces would be the last phase of French territorial expansion in Indochina as Siam would later cooperate with the British in the region, who feared uncontrolled French expansion and control of Siam would upset the balance of powers in Indochina.

During World War II, the 1940–41 Franco-Thai War left the French Indochinese colonial authorities in a position of weakness. The Vichy government signed an agreement with Japan to allow the Japanese military transit through French Indochina. Meanwhile the Thai government, under the pro-Japanese leadership of Field Marshal Plaek Phibunsongkhram, took advantage of its position and invaded Cambodia’s western provinces. Japan compelled French authorities to cede Battambang, Sisophon, Siem Reap (excluding Siem Reap town) and Preah Vihear provinces to Thailand. Despite an invasion of French Indochina, Japan allowed French colonial officials to remain in their colonies under Japanese supervision. After allied military units entered Cambodia, the Japanese military forces present in the country were disarmed and repatriated. The French were able to reimpose the colonial administration in Phnom Penh in October 1945.

In 1946, Cambodia was granted self-rule within the French Union and had its protectorate status abolished in 1949. In June 1952, King Sihanouk announced the dismissal of his cabinet, suspended the constitution, and assumed control of the government as prime minister to start his royal crusade for independence. In March 1953, King Sihanouk went to France to mount an intensive campaign to persuade the French to grant complete independence. The French government, on 3 July 1953, declared itself ready to grant full independence to the three states of Cambodia, Vietnam, and Laos. King Sihanouk insisted on his own terms, which included full control of national defense, the police, the courts, and financial matters. The French yielded: the police and the judiciary were transferred to Cambodian control at the end of August, and in October the country assumed full command of its military forces. Since then, the King Sihanouk became a hero in the eyes of his people, and returned in triumph to Phnom Penh. Cambodian people viewed him as “the Father of Independence” while the Independence Day was celebrated on 9 November 1953.