The lovely temple of Mebon, a pyramid of receding terraces on which are placed many detached edifices, the most effective being the five towers which crown the top Could any conception be lovelier, a vast expanse of sky-tinted water as wetting for a perfectly ordered temple.

The East Mebon is 500metre (1,640feet) north of Pre Rup. A enter and leave the temple from the east entrance. It was built in the second half of the tenth century (952) by king Rajendravarman II, dedicated to Siva (Hindu), an ancestor temple in memory of the parents of the king with following the Pre Rup style art. 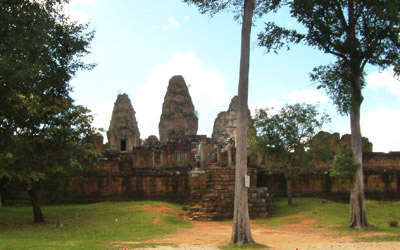 The Mebon stands on a small island in the middle of the Eastern Baray, which was a large body of water (2 by 7 kilometres, 1.2by4.3miles) fed by the Siem Reap River. The temple was accessible only by boat. Today the baray, once a source of water for irrigation, is a plain of rice fields and the visitor is left to imagine the original majesty of this temple in the middle of a large lake.

LAYOUT
The East Mebon is a temple with five towers arranged like the numbers on a die atop a base with three tiers. The whole is surrounded by three enclosures. The towers represent the five peaks of the mythical Mount Meru.

The outer enclosing wall is identified by a terraced landing built of laterite with two seated lions on each of the four sides. The interior of this wall is marked by a footpath. The neat enclosing wall is intercepted in the middle of each of its four sides by an entry tower in the shape. Of a cross The towers are constructed of laterite and sandstone and have three doors with porches. An inscription was found to the right of the east tower. A series of galleries surrounds the interior of this enclosing wall. The walls are of laterite and have porches, sandstone pillars and rectangular windows with short balusters. The galleries were originally covered with wood and tiles but today only vestiges remain. They probably served as halls of meditation.

The stairways of the tiered base are flanked by lions. Beautiful monolithic elephants stand majestically at the corners of the first and second tiers. They are depicted naturalistically with fine detail such as harnessing. Tip: The elephant in the best condition, and the most complete, is in the southwest corner.

ENTRY TOWERS
The lintels on the west entry tower depict Visnu in his avataras of man-lion tearing the king of the demons with his claws (east). At the northeast corner Laksmi stands between two elephants with raised trunks sprinkling lustral water on her.

INNER COURTYARD
The large inner courtyard contains eight small brick towers on each side opening to the East. Each one has octagonal columns and finely worked lintels with figures amongst leaf decorations. On the East Side of the courtyard there are three rectangular laterite buildings without windows opening to the west. The two on the left of the entrance are decorated with either scenes of the stories of the nine planets or the seven ascetics. Vestiges of bricks above the cornices suggest they were vaulted. There are two more buildings (without windows) of similar form at the northwest and southwest comers of the courtyard.

UPPER TERRACE
The terrace with the five towers was enclosed by a sandstone wall moulding and decorated bases. Lions guard the four stairways to the top platform.

CENTRAL SANCTUARIES
The five towers on the upper terrace were built of brick and open to the east; they have three false doors made of sandstone. Male figures on the comers are finely modeled. Circular holes pierced in the brick for the attachment of stucco are visible. The false doors of the towers have fine decoration with an overall background pattern of interlacing small figures on a plant motif.

LINTELS ON THE TOWERS OF THE UPPER LEVEL

CENTRAL TOWER
(East side): Indra on his mount, a three-headed elephant, with small horsemen on a branch; scrolls with mythical beasts spewing figures under a small frieze of worshippers; (west side): Skanda, God of War rides his peacock; (south side): Siva rides his sacred bull Nandi.

NORTHWEST CORNER TOWER
East side: Ganesa is curiously riding his trunk which is transformed into a mount.

SOUTHEAST CORNER TOWER
North side: The head of a monster is eating an elephant.

Chapel of the Hospital