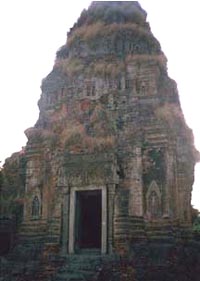 Prasat Lolei is at Roluos, north of Bakong. A modern Buddhist temple is located in the grounds of Lolei near the central towers. It can be accessed by enter and leave the temple by the stairs at the east.

Tip: Beware of the ants during certain seasons near the top of the entrance steps.

It was built in the end of the ninth century (893) and dedicated to Transitional between Prah Ko and Bakheng.

According to an inscription found at the temple the water in this pond was for use at the capital of Hariralaya and for irrigating the plains in the area.

LAYOUT
The layout consists of two tiers with laterite enclosing walls and stairway to the upper level in the center of each side. Lions on the landings of the stairways guard the temple. A sandstone channel in the shape of a cross situated in the center of the four towers on the upper terrace is an unusual feature, the channels extend in the cardinal directions from a square pedestal for a linga. It is speculated the holy water poured over the linga flowed in the channels.

CENTRAL SANCTUARIES
Four brick tower with tiered upper portions, arranged in two rows, on the upper terrace make up the Central Sanctuaries. As the two-north towers are aligned on the east-west axis, it is possible the original plan had six towers, which probably shared a common base like that at Preah Ko.

Tip: The northeast tower is the best preserved. The entrances of the doors to the towers are cut from a single block of stone, as at Bakong. The corners of the towers on the east are decorated with male guardians holding tridents and those of the west with female divinities holding flywhisks. They are sculpted in sandstone with a brick casing. The panels of the false doors have multiple figures. The inscriptions on the doorframes are exceptionally fine.

The workmanship on the lintels is skilled and the composition balanced. Some noteworthy depictions are: Indra on an elephant with figures and Makaras spewing serpents (northeast tower); Visnu riding a Garuda with a branch of serpents (south-east tower).

Chapel of the Hospital