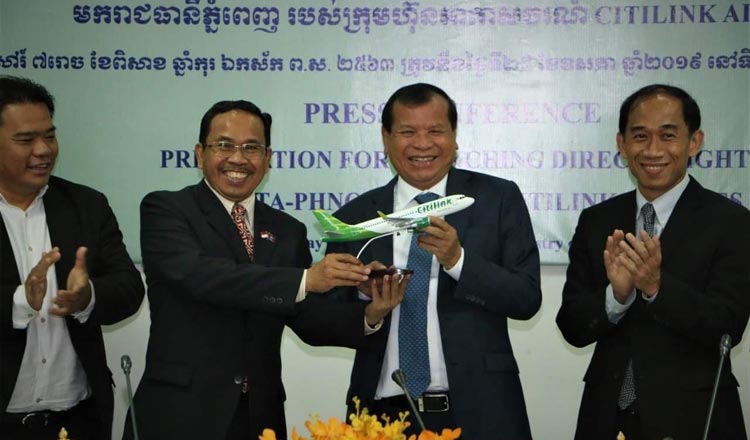 A direct flight from Jakarta to Phnom Penh will be available starting mid-June, low-cost carrier Citilink Indonesia and the Cambodian Ministry of Tourism announced on Saturday.

During the launch of its latest regional route, Citilink Indonesia president director Juliandra Nurtjahjo said this announcement reflects the company’s commitment to expand its international flight networks and to support the Indonesian government’s goals to increase the number of inbound foreign tourists.

Heriyanto, vice president of Citilink, said, “When the Jakarta-Phnom Penh flight operates smoothly, we will expand to other international airports in Cambodia such as Siem Reap and Sihanoukville.”

He said that a flight from Bali is also on the table.

Cambodian Tourism Minister Thong Khon said the direct flight will increase the flow of tourists between the two countries.

“This direct flight will enhance tourism between Indonesia and Cambodia. I expect many Cambodian tourists to travel to Bali, Borobudur, and many other beautiful destinations in Indonesia,” Mr Khon said.

“Indonesia tourists, on the other hand, can visit Cambodia’s many attractive tourist sites, including Angkor Wat, Preah Vihear, and Sambor Prei Kuk, as well as the coast and ecotourism destinations,” Mr Khon added.

According to Citilink Indonesia, the direct flight from Jakarta to Phnom Penh will commence in the middle of June, utilising the service of Airbus A320, which could carry up to 180 passengers per flight.

This will be the third international route additions for Citilink Indonesia this year, following the announcements of Surabaya-Kuala Lumpur and Jakarta-Kuala Lumpur routes. Prior to that, the carrier has been operating commercial flights to Penang, Malaysia, and Dili, Timor Leste.