Domestic tourism to be boosted amid fears of COVID-19 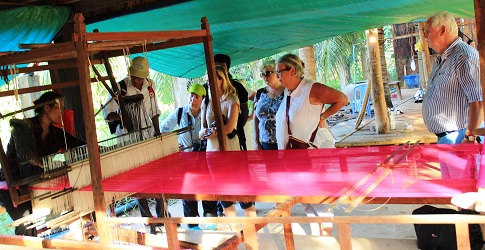 The Ministry of Tourism is aiming to boost local tourism with cutting edge products and services, including specially trained tour guides.

The news comes as a new study shows Cambodia is one of the least polluted countries in the region.

Both Prime Minister Hun Sen and Tith Chantha, secretary of state at the Ministry of Tourism, have called for more people living locally to travel domestically on holiday. The former specified he didn’t want people bringing the potentially fatal COVID-19 Coronavirus into the country as records show fewer outsiders are visiting.

Last year, Cambodia’s tourism sector grew 6.6 percent to 6.6 million foreign tourists, generating an  income of $5 billion. However, it’s feared COVID-19 will reduce that figure this year by about 10 percent.

Meanwhile it’s been revealed by one of the leading air filtration companies in the world that Cambodia is among the least polluted countries in Southeast Asia.

The 2019 World Air Quality Report released by IQ Air ranked Cambodia as the fourth least polluted country in the region. The Kingdom was only beaten in the rankings by the Philippines, which the survey put as the country in Asean with the cleanest environment, Singapore and Malaysia.

Cambodia recorded an average of PM 2.5 concentration of 21.1 millionths of a gramme per cubic metre of air (µg/m³), while for the Philippines, it is 17.6 µg/m³.

The rankings are based on the level of particulate matter in the air with a diameter of less than 2.5 micrometres – about 3 percent the diameter of a human hair and known as PM 2.5. This includes pollutants such as nitrates and black carbon, which are harmful to health and are among the causes of respiratory diseases such as asthma as well as potentially causing strokes and heart attacks. Ninety-eight countries from six continents were included in the annual study.

IQAir’s findings contrast with other recent studies, which found Cambodia to be grossly deficient in managing and protecting the environment. The Environmental Performance Index for 2018 ranked Cambodia 150th out of 180 countries included in the study.

Like other developing countries and emerging economies, Cambodia is grappling with increased air, water and soil pollution.

The blame for such environmental maladies has largely fallen on rice milling, brick kilns and rubber processing. Manufacturers, including the many garment factories found in Phnom Penh, Kandal and other provinces, are also blamed for Cambodia’s rising levels of pollution.