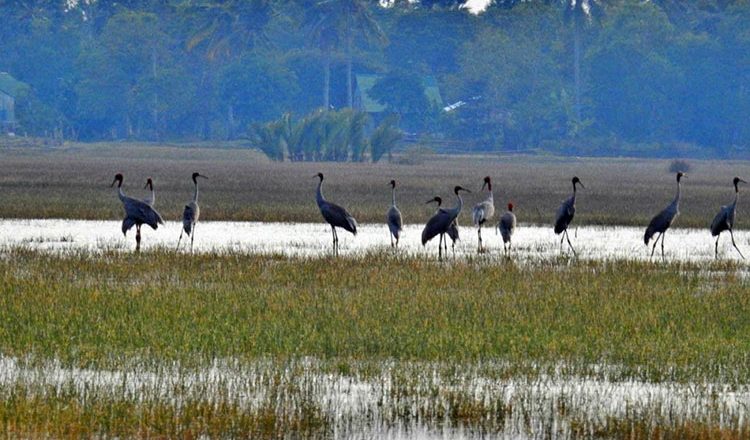 By the morning of Jan. 18, 2021, a total of 59 sarus crane arrived Anlung Pring Protected Landscape in Kampong Trach, Kampot, according to BirdLife International Cambodia Programme.

BirdLife International Cambodia Programme and partners are conducting a census on this endangered giant bird species. The survey is expected to finish in May.

Only 194 sarus cranes were counted in Cambodia during the 2020 census.

During the breading period, cranes move to Preah Vihear, Rattanakiri, Mondulkiri provinces for nesting, and during the non-breeding period, they go to the wetland of Takeo, Kampot, and other provinces around Tonle Sap for foraging. Habitat conversion, human disturbance, and egg and chick stealing are the main threats to this species.

According to BirdLife, Sarus Crane (Grus antigone sharpie) was justified in the red list category. This crane is listed as vulnerable because it is suspected to have suffered a rapid population decline. Totally, the whole population is between 13,000-15,000.