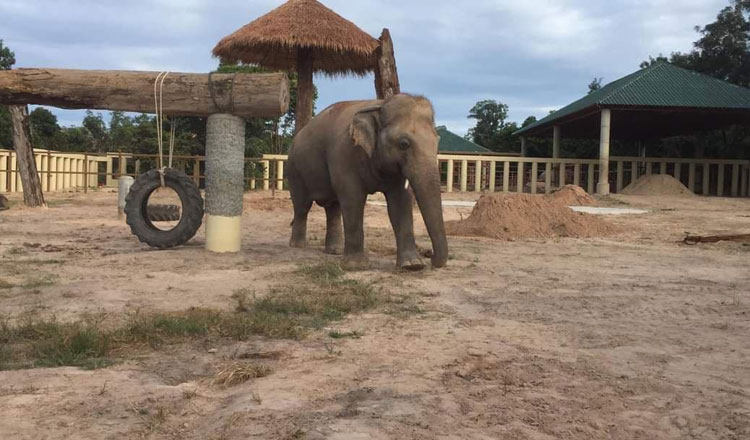 ODDAR MEANCHEY, Cambodia — Lonely Pakistan elephant Kaavan is healthy and has quickly adapted himself to his new home here, Cambodian Ministry of Environment secretary of state and spokesman Neth Pheaktra said on Friday.

The 35-year-old Asian bull elephant arrived in northwest Cambodia’s Siem Reap province from Pakistan by a chartered plane on Nov. 30 after spending nearly 35 years in an Islamabad zoo, and he was transported to the Kulen Prum Tep wildlife sanctuary in Oddor Meanchey province soon after his arrival.

Pheaktra said that under the care and protection of the Cambodia Wildlife Sanctuary (CWS), Kaavan has been enjoying his new life with other female elephants in the sanctuary.

“Kaavan is healthy and has adapted himself very well with the atmosphere of his new home, and he starts to get on with other female elephants around him,” he told reporters during a visit to the giant mammoth.

“From now on, Kaavan, which was previously known as the world’s loneliest elephant, is no longer lonely because in the Kulen Prum Tep wildlife sanctuary, we have arranged three female elephants to live with him,” he said. “We hope that Kaavan will help produce many Asian baby-elephants for Cambodia.”

CWS President Sok Hong said Kaavan has begun to enjoy his new life in the sanctuary and will be released into the wild in the next few months.

“I think it will take three months to take care of Kaavan before releasing him into the wild because now he has started to accustom himself to the nature here,” he said.

Pakistan allowed Kaavan to be relocated to Cambodia after it had been kept in an Islamabad zoo for nearly 35 years.