Things to See and Do - Sihanouk ville, Cambodia 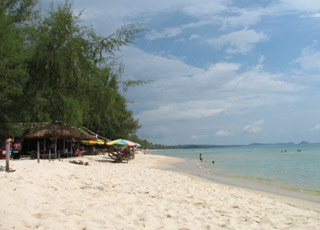 Ochheuteal Beach, known as UNTAC Beach in the early 1990s and it is now the most popular in Sihanoukville, offering the full spectrum of beach venues from upscale hotels and dining to laid-back budget beach bars and bungalows.

Ochheuteal is long, sandy and narrow, with 'Serendipity Beach' at the northern end, a golf-course development at the southern end, and a cluster of mid-range hotels and restaurants near the MP base in the middle. Grass umbrellas, rentable beach chairs and little drink huts line the beach from one end to the other.

It offers several nice hotels including the Seaside and Crystal, the mid-range Holiday, as well as some of Sihanoukville's better seafood restaurants, (Sea Dragon, Susaday, Sunshine and Les Feuilles), within walking distance of the hotels. Further south along the beach in front of the golf course develop-ment, a number of budget traveler/backpacker oriented bar/restaurant/beach hangouts have sprung up offering chairs, umbrellas, drinks and a chill-out atmosphere.

At Ochheuteal's extreme northern end, Serendipity Beach' is the only beach in Sihanouk-ville to offer bungalows and guesthouse rooms right on the sand. Over the past two years Serendipity's popularity has grown exponentially, as have the number of bungalows, hotels, and restaurants. The beach now offers several mid-range and budget places including Coasters' well-known bungalows, Uncle Bob's 24-hour restaurant and budget rooms, and The Beach?s mid-range rooms. There are also places popping up on the hill just above the Serendipity such as Diamond Guesthouse and closer to the traffic circle, Sanctuary Bar and Guesthouse. To get to Serendipity Beach follow Ekareach Street straight through the Golden Lion Traffic Circle and UP and over the hill.

Find hotels in Sihanouk ville on Agoda.com. Free Cancellation and Pay when check out.

Other Attractions in Sihanouk ville 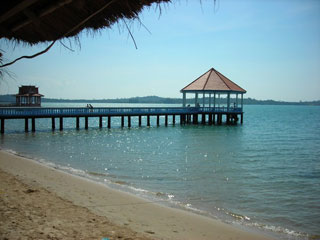 The untouched beach of Ream is located in the Ream National Park. Take Route 4 to the Airport road 18km north of town. Turn right, go 9km to the ocean. The beach to the right is long and narrow and frequented more by fishermen than tourists. Behind the beach is a mangrove swamp, which attracts a wide variety of tropical... read more 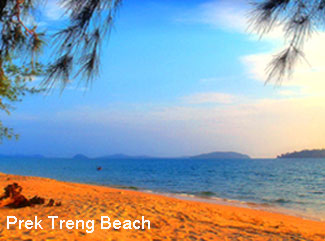 Also known as the â€˜Hun Sen Beach,â€™ the Prek Treng Beach a few kilometers north of town is a long, narrow crescent of sand, a bit rocky in parts, offering comparatively warm shallow waters. Due to Prek Trengâ€™s distance from town and complete lack of services (no guesthouses,... read more 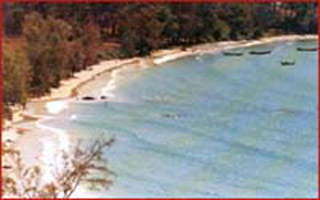 Koh Pors is an island about 1 kilometer from Lomhe Kay beach, off the coast of Sihanoukville. The beach is flat and very quiet. It is attrachs few visitors, because it is undeveloped. Those tourists who do visit the island travel in groups and bring their own food. read more 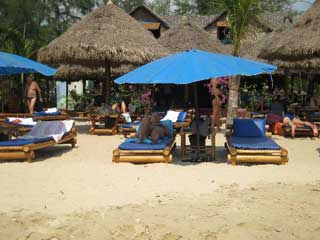 Otres Beach is the next beach south of Ochheuteal Beach and resembles Ochheuteal in many ways - a three kilometer crescent of near white sand facing the southwest. But Otres is far less developed and touristed than Ochheuteal, offering a more leisurely, relaxed atmosphere, and caught the eye of Forbes this year, listed amongst the... read more 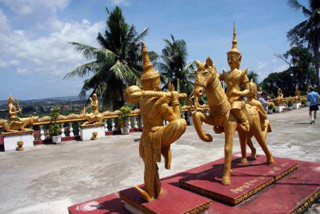 The beach is short and narrow, and the waves are bigger that at other beaches, making it popular with locals, who favor it most after Sokha Beach. read more 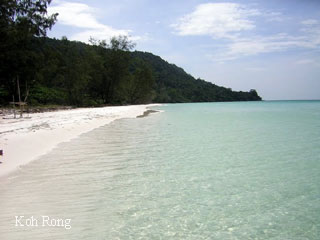 Koh Rong Island is a Cambodian Island in the Gulf of Thailand, at about 40km off the coast of Sihanoukville. Actually, the island is deserted, undeveloped and untouched. It's a secret island. But it will be soon one of the famous touristic destination of Cambodia. The island is certainly the most beautiful island of the Kompong Som... read more 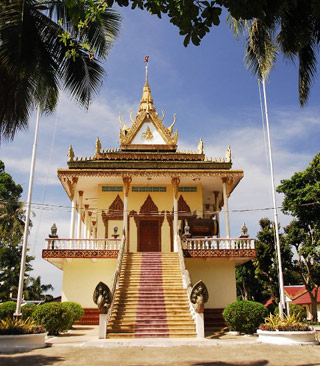 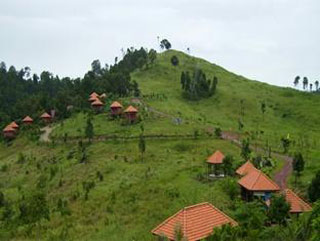 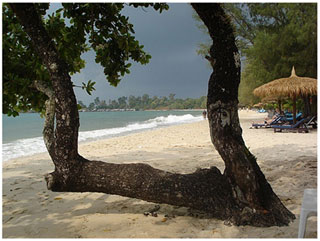 Sokha Beach adjoins O'Cheuteal Beach. It is also long though the water is deeper than here. The beach was once more crowded than O'Cheuteal Beach, because Cambodians prefer it to the other beaches. However, Oknha Sok Kung's Sokha Hotel Company recently took over operations at the beach. The company is building up the area in hope of... read more 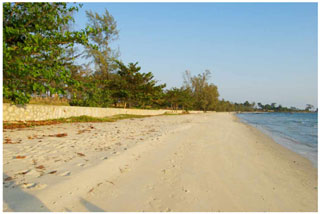 Independence Beach gets its name from the deserted hulk of the 7 -storey Independence Hotel at the north end. Locals call this beach 'otel bram-pil chann (hotel 7-stories). It is labeled '7-Chann Beach' on the in-town street sign. Independence is more than a kilometer long, but the sandy area is much narrower making the beach best... read more 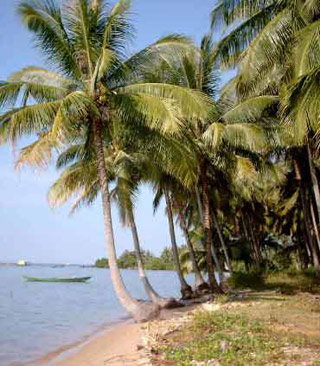 The beach is located in front of Koh Pors (Snake Island). It offers a number of services, including comfortable restrooms, fresh water and good transportation service to Koh Pors. Thus, many local and international visitors go to this beach. There are many well organized kiosks along the beach, the waves are not big, and invironment... read more

Phnom Leu is a nature and cultural site. There is a pagoda on the mountaintop, which offer visitors a panoramic view of the beaches and Sihanoukville international port. Most visitors are local people who visit the site during national festivals. read more 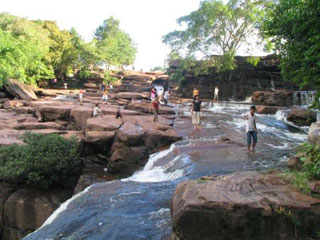 Kbal Chhay waterfall is located in Khan Prey Nup, about 16 kilometers north of the downtown Sihanoukville. To reach the site from Sihanoukville, take National Road 4 toward Phnom Penh. About 7 kilometers out side of town, there is a sign announcing the site. Turn left and go 9 kilometers along a trail. The water at Kbal Chhay comes... read more 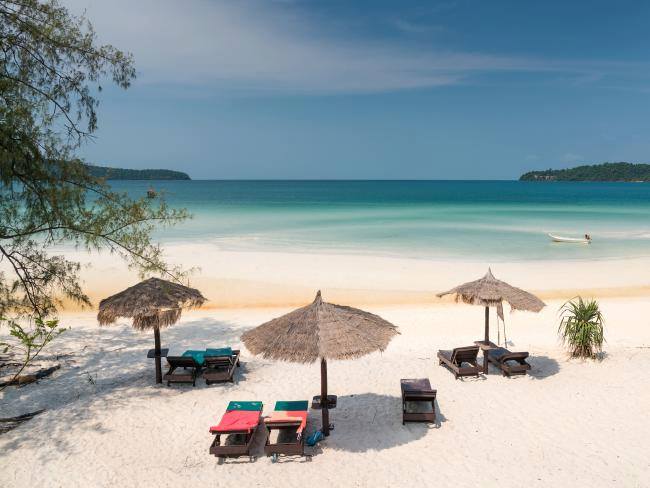 Koh Rong Sanloem is changing fast. Photos and descriptions from two years ago will be out of date. There are two main places to stay: Saracen's bay or Mpei bay. There are also private one hostel only beaches on lazy beach or Mad Monkey, these may require direct transfers or a lot of walking. read more

Ochheuteal Beach, known as UNTAC Beach in the early 1990s and it is now the most popular in Sihanoukville, offering the full spectrum of beach venues from upscale hotels and dining to laid-back budget beach bars and bungalows. Ochheuteal is long, sandy and narrow, with 'Serendipity Beach' at the northern end, a golf-course... read more